The Bottom Line is - it pays to be media trained

One day with us will change the way the world sees and hears you...

Mentor has worked extensively with health and social care organisations over the 20 years in which we have served our public and private sector clients.

Our team was asked to provide train for the senior leadership team of Somerset Care ltd, which operates nearly 30 care homes across the south of England.

It's fair to say that while there was evidence of some nerves and initial reticence, when the team arrived, a quick explanation about the day, a coffee and some interviews to break the ice, they all rose to the occasion.

People often attend media training courses with trepidation about somehow making fools of themselves, saying the wrong thing or terrified of the first interview. We aim to shatter some of the myths around doing interviews, while re-calibrating any negative perceptions of journalists and the mainstream media.

For the CEO of Somerset Care, part of the issue in the past year has been the looming social care crisis and how to manage the tone and delivery of some very sensitive matters.

Dr Jane Townson decided there was a need to engage in a debate around a system which was about to become a huge news story at the end of the year. In doing so, she recognised that thought leaders need the confidence in their presentation and media handling skills to 'stick their heads above the parapet'.

A day of understanding press, radio and TV skills will lots of practical exercises for live and pre-recorded encounters, resulted in a one-to-one intensive follow up session with Dr Townson. 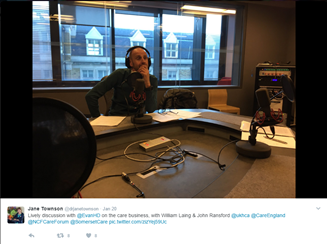 "After a day with Dave and Rachel, we’d learned what to do, what not to do, and how to play the journalists’ own game.

Now we know that, with preparation and practise, we can give it a go and that Mentor is always there to help us if we need extra coaching and feedback for a specific purpose."

The Mentor team is keen to work with other similar organisations who are looking for that confidence to get out and tell their story.

“Since doing this training, I’ve found the courage to put myself “out there” and, on the back of only one published article so far, have been contacted and interviewed by various journalists for both print and broadcast media pieces, both locally and nationally. We all found this training valuable and can thoroughly recommend Mentor."”