Today I met and filmed unaccompanied children in the “Jungle Kids Café” set up as a safe place for kids to hang out during the day. Adults aren’t allowed inside. Most of the kids looked tired. Some were playing pool but there were no smiles. Most were opposed to filming.

I shot a couple of young teenagers on the sand dunes on the edge of the camp. They told me how they had fled Afghanistan in fear of the Taliban who’d killed members of their families and were hoping to get to the UK. 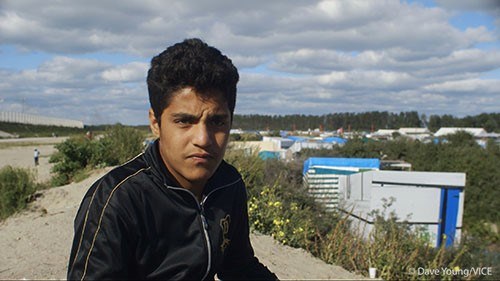 While I was filming Pete went back to the car to collect a big bin bag of trainers we’d collecting from the UK . On his way back he was ambushed by migrants — someone whispered the word ‘shoes’ — and would have lost the lot if it weren’t for his quick thinking: he employed the services of the biggest guy he could see who used his bicycle sideways to clear a path through the mob, with Pete, limpet-like behind him.

There has been much talk of kids looking older than their ages. I think everyone in the camp looks older than their years for obvious reasons: Try fleeing your country, travel half way across the globe the hard way, live in a tent or makeshift shelter for a few months without adequate food or basic living facilities in a foreign country with no clue as to your future and see how young and fresh you look and feel. 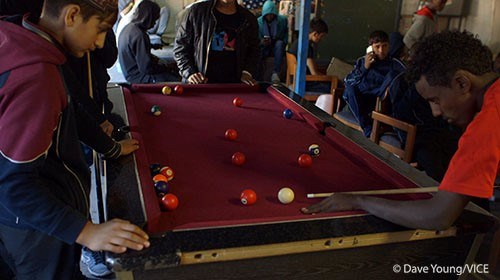 By the end of another long day Pete was clearly affected. He said his four kids were going to learn all about Calais….and lose their trainers.