Difficult questions are being asked of Boeing about whether it did enough to guarantee passenger safety after the Lion air crash in October last year.

Now that the UK’s CAA (Civil Aviation Authority) has announced it is banning all Boeing 737 Max 8 jets from British airspace, it sets national aviation authorities on a course for uncomfortable discussions with American authorities (who approved the aircraft) and with Boeing itself.

After Sunday’s crash of the Ethiopian Airlines plane, which killed 157 people from 35 countries, Boeing share prices have plunged, along with passenger confidence. The US Federal Aviation Administration (FAA), which approved the airworthiness of the 737 Max 8, stands by its decision, saying it’s too soon to speculate about the cause of the crash.

As a result the FAA’s reputation is now as much at stake as Boeing’s, now that numerous countries have grounded the aircraft from their airspaces, including the CAA in the UK. TUI and Norwegian were the main operators using the 737 Max 8 in the UK.

Passengers and some aviation experts have expressed deep concern over a disclosure from Boeing about how it trained pilots in using the upgraded software on the Max 8. This appears to be the leading issue which Boeing will have to manage from an historic governance perspective. Suspending the aircraft in China is of huge significance to the manufacturer.

Now is the time for this global aircraft brand to get its message out and to start communicating from the top, as the British Midland chairman Michael Bishop did so ably in his handling of the Kegworth air crash in 1989. 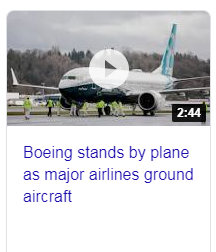 Any guidance issued by Boeing after the October crash would support its case - it need only say that it is complying with air crash investigators.

Pilots in Argentina are part of a growing band who refuse to fly the aircraft because of software and training concerns. Journalists around the world are already surmising that Boeing has tough questions to answer and whether any ‘corners were cut’ in terms of safety when marketing the new aircraft. Brazil was the only country which demanded extra training for pilots. Now airlines and customers will be lining up to ask why they weren’t offered more options.

Was anything hidden or not discussed in full as pilots received their training manuals?

While Boeing’s set piece written statement offered condolences and senior staff to support efforts at the crash site, 300 deaths in 5 months could potentially leave a perception that Boeing has put profit over safety. And as both BP and VW know only too well, this is a challenging position to be in as a market leader in an industry where safety is paramount.

What the public wants to see in any crisis is an executive who will take charge of the situation, show us her/his compassion and tell us what steps the company is putting in place to resolve the issue.

In the immediate aftermath of the loss of the Ethiopian Airlines aircraft its CEO was interviewed on camera. The Government-owned airline put a clearly shocked spokesperson forward who may not have been able to provide any answers, but at least showed the humanity of the airline in the face of tragedy. Strategically this also positions them as victims.

With a global crisis to manage that highlights a failure in issues management and potentially reveals flaws rooted in the decision not to communicate directly and openly with customers and authorities, the Boeing captaincy must now be in question.