The future of local news and creating media opportunities

In a phone call recently, a communications manager in a regional borough was trying to dismiss the idea of media training for his executives, because; “we don’t speak to local media anymore, as there aren’t really any journalists left.”

Was this an opportunity missed, or was he right?

If you take a purely traditionalist view of ‘the media’, this rationale may hold some water – but it’s a pretty 20th century ‘take’. The ‘Vandals aren’t at the gates yet’, and you shouldn’t be sacking your PR agency or in-house media relations people. Why?

Well, for starters, let’s look at the latest data. 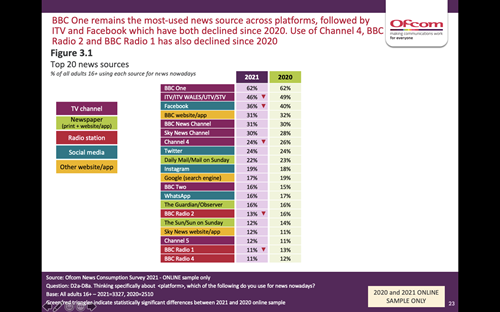 BBC One was still the number one source of news in the UK in the 2021 Ofcom news consumption survey. The split between where adults get their news from, is 49% social / internet, to 51% mainstream media.

Locally, yes, regional newspapers continue a year-on-year decline, only 32% of adults use them for news, while radio is also a diminishing medium for news listenership, but the internet also dipped slightly in the latest survey. Since many mainstream media outlets sit across social media and create video content on these platforms, isn’t it wise to have a broad and holistic corporate communications mix?

I’ve heard of some organisations and charities ditching their traditional PR support, having gravitated towards concentrating on ‘owned’ media channels, i.e., exclusively their Facebook and Twitter. In my view, this a flawed and risky strategy.

Firstly, it’s still widely held that greater credibility comes from ‘earned’ coverage than it does from ‘bought’ media. So, your social videos and stories have a far greater chance of penetration to key audiences if mainstream media is talking about you too. That takes good PR and comms people with strong, continuing relationships with busy, multi-platform journalists who need lots of prodding and reminding. Also, BBC and commercial radio stations make video content for their Facebook and other channels. Why miss out on 46% news reach for radio?

Secondly, it’s true that traditional local commercial radio and press have virtually disappeared in many parts of the country,studios and offices essentially razed to the ground in towns and cities, with physical journalists rarer than a pack of one-legged hunting tortoises. But from the ashes, green shoots have emerged from ‘village pump’ journalism, free papers both in print and online, and the 300 local community radio stations which have sprung up in recent years to take the baton. 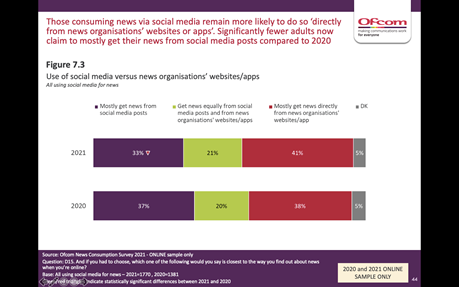 It’s my firm belief that the future of local media lies in community interest companies and news operations which have charity status, providing not-for-profit journalism. The model is already here.

In Bath, a new DAB community station, (I should declare that I am a trustee), is providing daily news bulletins using former journalist volunteers. The news material is provided by the Bath Echo, a free, independent local online newspaper and the bulletins represent the first, locally produced broadcast news in the city in a decade.

Many of these new outlets are staffed by volunteers, some of which are former media professionals, but many of which are enthusiastic amateurs. Where we are advising firms to do much of the journalists’ work for them when creating content, the same applies when appearing on smaller community stations.

You can disseminate your message the way you want to, when appearing live on these shows, but bear in mind that as volunteers, the presenters may not have had the time to deep-dive into your corporate world. You need to make it simple and clear for presenters to understand context, give examples and explain your organisation’s place in the world.

Post pandemic, of course, where guests haven’t been able to go into studios, the remote Zoom option has given radio and tv shows unlimited access to guests around the world – viewers accept the slightly degraded visual quality, while radio listeners hear a higher quality link!

Give this backdrop of a changing media landscape, to be relevant, effective and transparent, you should be aiming for a strong, strategic communications mix of owned content, dove-tailed with traditional media engagement. Ofcom data remains fairly static for mainstream news consumption, (TV unchanged), so you should be doing BOTH.

Thirdly, speaking to your local media, in print or on community radio, gives you access to grass roots audiences, vital media training practice and engenders trust from your communities, because you are seen and heard to be engaging. The value in this public engagement cannot be overstated. Forbes magazine described in 2017 how ‘careful executive positioning can inoculate a CEO against a crisis,’ because the media and the public will give you the benefit of the doubt. I have lots of personal experience of this in media settings and it rings true.

Of course, you can organise your own Facebook ‘lives’, but why not put yourself in a position to be questioned and challenged. It’s precisely how democracy is meant to work.

The biggest breaking news to emerge from this?

You can now send in material, film and record your own content and using a combination of your own channels and mainstream media, reach audiences in a strategic communications mix, which should be the envy of your competitors. Investment in training to up-skill your team is relatively modest, when compared with the content returns and customer engagement.

The latest Ofcom data supports this approach and in a fast-changing, post-pandemic media environment, I wouldn’t want to put all my video thumbnails in one editing basket, (poor 21st century effort at updating eggs!)

There are separate debates to be had about journalism and democracy, holding institutions to account and the amount of clickbait, shared content and erosion of locally-present, professional hacks, but for now, the digital ‘swingometer’ is definitely leaning your way for distributing your corporate stories.

Grab the opportunity quickly, while your competitors are still playing catch up.

For more information on how to conduct remote media interviews, as well as face-to-face exchanges, see our range of CPD accredited media coaching courses here