At Mentor Media Training we are extremely lucky to boast some of the UK’s top journalists as colleagues. Last week I talked to Angus Walker, ITN’s Political Correspondent and one of our trainers, at the ITV studio in Westminster and captured his thoughts for two short Mentor Media podcasts.

Having held the roles of UK Editor, Political Correspondent and Asia Correspondent for ITV News, Angus is an experienced international journalist. Recently returned from a month reporting from Brussels, Angus shared his views on the mood in Europe right now, the differing roles of journalists and editors in sharing stories, truth, impartiality and public interest in the newsroom, and what impact UK business voices are having on political debate at Westminster. 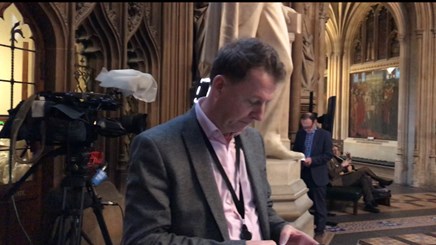 The rising lack of trust in both politicians and journalists has been widely reported, even before the phrase ‘fake news’ was coined. I wondered whether the job of a political correspondent has become thankless, because when you report on what politicians are saying large swathes of the public don’t believe anything that’s being told them by the mainstream media.

Angus agreed this is an issue, but pointed out the confusion between different sections of the media in the UK: “A lot of people don’t differentiate between broadcasters and print. Television and radio, by law, must be neutral and there is a watchdog, Ofcom, breathing down on us. Papers can be partisan. But people lump us all together. There are so many different parts to the media and they operate differently.”

I was interested in his views on how neutral a journalist or editor can really be, and whether criticisms of particular editors or channels for political bias are justified. He responded that personally he doesn’t like to offer any of his own views in his reports. His role is to report the facts and comments or views of others:

“Each person has their own style. No reporters are the same. But the audience doesn’t care what I think. What I think doesn’t matter.

“Their job is to take us by the hand and walk us through some of the very tangled rhetoric that comes out of politicians on a daily basis.”

Staying on the subject of the opinions of others, I asked how Britain is currently viewed in Brussels, following the Brexit debacle. Angus didn’t hesitate sharing his thoughts on that topic:

“Well to put it bluntly they just think we’re absolutely nuts. At the highest levels they believe in the ‘European Project’. Listen to Merkle, listen to the French President, because the one thing that they think is absolutely the best thing in the whole wide world is the single market. Which they will protect to their dying breath. And they cannot believe that anyone would be so stupid to walk away from a single market.

“Brexit is increasingly becoming more of a nuisance. Brussels is a place that runs on choreography and rules. And it’s really annoying them that this hasn’t been wrapped up.” 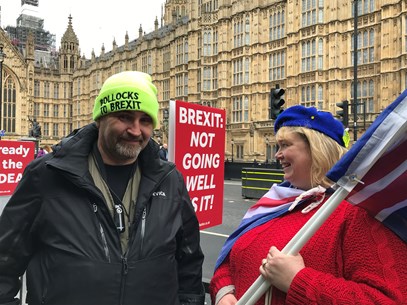 I was also interested in the role of business in shaping policy decisions and whether Angus believes the voice of UK plc is being listened to in Whitehall.

“I think the voice of business has been getting through very well,” he told me. “If you look at Greg Clark, the business secretary, if you look at the Chancellor Philip Hammond, they are very conscious of what business thinks and fears.

“Really Hammond and Clark represent the ‘soft Brexit’ point of view. They want a really close relationship, as close as possible. Frankly they would have a customs union and a single market if they could. Because they listen to business more than any other Cabinet ministers. They’re the ones listening to business. They’re the ones being told by businesses that ‘no deal’ is an absolute disaster, that ‘hard Brexit’ would be really difficult for us.

“Both sides of the Channel, neither the UK or the EU, wants ‘no deal’. Because businesses have told both sides ‘We don’t want it’.”

With the machinations of Brexit rumbling on somewhat interminably I wanted to know whether there was light at the end of the tunnel. Unlike many others right now, Angus was very clear on what the future will hold: “This is not going away. We’ll be talking about this story for years. This has framed British foreign policy for generations.”

To hear the full interview listen here, and if you missed Part 1, then you can catch up.