BLOG: What went wrong at Pret?

I want to begin by saying how sorry I feel for the families of those who've lost their lives, due to the allergy crisis that has hit Pret a Manger.

The decision whether to eat out, or make something at home, is a daily conundrum for millions of us, myself included, as we take our chances in restaurants and food outlets.

I've read a range of articles over recent days, some saying that we all need to take more control over our allergies, not blame sandwich shops and if it's a serious allergy, don't eat out. While that's one approach, it's not very practical. Luckily for me, my wheat allergy only makes me ill, it doesn't threaten my life.

I've also heard a professor on the radio saying that most food manufacturers really don't know what actually goes into their food, the supply chain is too long, often international, (Daily Mail 9/10/18), and guarantees of no cross-contamination cannot be made - cue the ugly legal row between Pret and CoYo over dairy free. All pretty terrifying stuff in our processed, globally reliant lives.

But what of the Pret crisis? Companies are judged, as last week's inquest shows, not by what befalls them, but how they are perceived to have handled any fallout. And Pret's case highlights so many lessons which are not being learned by large organisations.

So, for the crisis communications bit. The trouble for Pret now is the sense that 'vultures are circling' and 'the media' are onto them - they smell blood.

This is because risk issues in the business, many of which we can see now, should've been swept up by the CEO promptly, but were seemingly swept under the baker's mat, following the tragic death of Natasha Ednan-Laperouse in 2016.

Perhaps Pret's management thought - wait for the outcome of the inquest, then act!? If NHS bodies and hospitals acted in this regressive way, awaiting outcomes of official reports, people would continue to die in hospital wards from those same mistakes and Trust CEO's would be falling on swords weekly.

After one well-worded statement and, I have to give credit where due, an appearance by CEO Clive Schlee, which came across as honest, convincing and sincere in his apology to Natalie's parents at the inquest and in the media last week, it appeared they were 'out the other side'.

Had Schlee 'done a Nick Varney' and kept hold of the ball until the crisis was over, perhaps Pret could've averted the desperate and cynical statement which followed on Sunday, blaming CoYo for providing dairy protein. This was hastily mustered after a second death was revealed. Most dreadfully, condolences to the family were offered last in the statement, as if reputation and finger-pointing were everything, and a death and a family, last on their minds.

There's really no going back from statements like that. It undoes any good work by the CEO which preceded it and makes Pret look hollow, coldly corporate and deeply uncaring.

"Crisis is the time for more humanity, not less..," said former BP CEO John Browne, of his successor, after the Deepwater Horizon tragedy.

How did Pret lose its humanity between Friday and Sunday? Were no other experienced people available to offer the vital 'Crisis C.A.R.E.' messages that we impart in training sessions?

See their statement below and see if you agree?

So how should it have been structured to manage the further communications fallout on Sunday. Apart from the fact this terrible news could've been revealed by Pret last week, when they had a chance to deal with the two incidences at once, it could've read like this; 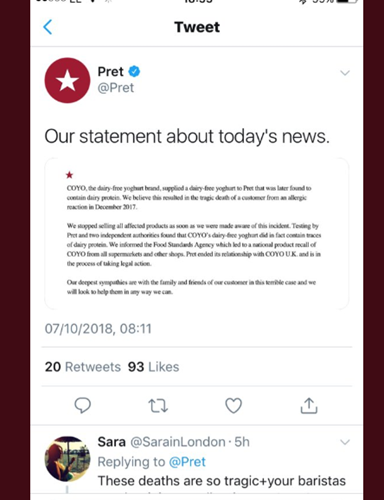 Para 1. Empathy with the deceased and family first and foremost

Para 2. Tell us what you done to manage the risk since both cases.

Para 3. Reassure us that while the inquest is not concluded and investigations are ongoing, the relevant products have been removed.

Para 4. Demonstrate your transparency by telling us when you will issue further statements / other acts of public engagement.

I do wonder if any communications professionals are represented at board level in Pret or its parent company.

There are now huge questions for Pret's CEO Clive Schlee and the board, to answer;

Why didn't Pret choose to act proactively after Natasha's death?

Like many organisations in a crisis, they could have been contrite at the inquest and shown Natasha's parents, who needed some closure, what they've already done to put matters right.

As it was, Natasha's mother described next month's trial labelling as; 'inconceivable' in its lateness and the firm's sloth-like response. A point not missed by LBC presenter Nick Ferrari when I appeared on his breakfast show on Monday to discuss the issues.

Why did another person die and still no pro-active action taken regarding food safety, sourcing and labelling?

Why did they not inform the Food Standards Agency sooner of the death of Celia Marsh?

Why didn't Pret reveal that two people had now died from allergic reactions and it had urgently put measures in place?

Why did Mr Schlee only offer a trial to start in November for wider labelling, 'to be rolled out to more stores next year'?

I suggest Mr Schlee and his board have no practical grasp on risk management, crisis management and crisis communications. Perhaps the investment company called the shots because more labeling costs more, against tight high street margins.

What price a reputation, eh?

Added to that, in the spring the ASA jumped on Pret for claiming their products were natural, when The Real Bread Campaign had found E-numbers in its bread, which were not labelled on packs, compounding the sense of Pret having ignoring a very serious issue, for a long time.

Now the vandals are at the gates - with newspapers delving into other aspects of Pret's business to 'freshen' the story as the conversation and the concern grows.

Reputationally, four organisations do not emerge particularly well from the last week. Pret, CoYo, the Food Standards Agency for their part in not revealing a death in early 2018 or getting tough on food suppliers, and British Airways for admitting during the inquest, that in-flight door procedures outweighed life-saving on board.

- Recognise your top issues and train for them.

- Crisis media train, (it's different to regular media training BTW!), ALL of your senior executives who may need to step up. No exceptions.

- Plan for your worst nightmares and run annual exercise days. Prepare holding statements based on the training.

- Remember, reputations have a value. Crisis ALWAYS have a cost.

In Pret's case, when lives are lost, one is too high.