Back to school for CEO's?

The corporate executive 'fails' which raise questions over modern leadership

Millions of people have been shocked by the brutality and contempt with which an airline has treated a 'valued' customer.

The jokes and backlash from air travellers on social and mainstream media have damaged United Airlines, putting them firmly on the back foot, after implementing their ‘involuntary denial of boarding’ process on a screaming, bloodied and traumatised doctor. The disturbing scene, captured on board by phone cameras, occurred so that the airline could have the seat for its own staff.

The initial response was unapologetic, defiant and missed the whole point about why they're in business - to satisfy customers. Did the CEO Oscar Munoz watch that footage before he responded? Where was his human instinct to reach out to passengers, his warmth, his understanding that this was the poorest level of customer service witnessed in, probably, decades - and it will live on for United for years? 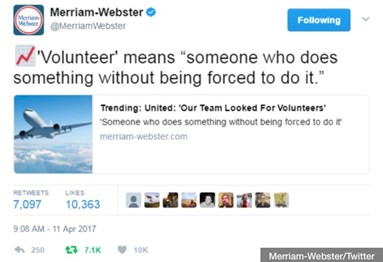 I was supposed to fly United to Boston this week to give a talk on journalism and reputation management to members of the US travel industry, but it was postponed. Now. I've tried speedy boarding, but I'm not so sure about trying United's new ‘speedy exit' scheme!

So instead, Mentor is announcing plans to open a training centre for CEO's who can't say sorry, until forced to do so by a falling stock! Sound like Fake News? The truth is, we've had our training centre since 1998, but our visitors tend to have the humility to understand that every day is a school day. As Oscar Munoz is swiftly learning.

I know that I speak for many journalist colleagues as well as myself, when I declare how weary I am, of faceless corporate statements behind which CEO’s hide. Seeing a human face, or hearing a voice express their sorrow and concern for one of their customers, will always trump a written statement. Always.

Since a third of CEO time is now considered to be devoted to communications, aren’t they being paid to be seen and heard? Going further, isn't it time we saw more leaders coming from a communications or marketing background?

The week by week catalogue of executive ‘school boy’ errors, demonstrates how removed from reality, many global captains of industry have grown. So ensconced are they, in their corporate bubbles, cocooned by the defensive structures and processes they oversee, they’ve lost sight of the common touch. So how come Branson always gets ‘out there’? What's going wrong?

Every Chief Executive should be sent back to the shop floor, at least annually, by the board, and in extremis, forced to spend time serving customers. 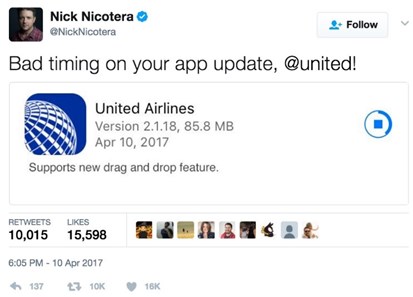 Über, Tesco, BP, Barclays, now United - all brands which have recently experienced reputationally damaging issues, where the people at the top have been implicated in bringing their organisations under media scrutiny for all the wrong reasons. In some cases there were efforts to cover matters up and in others, plain incompetent handling, perhaps driven by panic, a "sit it out, it'll blow over" strategy and share price preservation at any cost.

These aren't isolated cases, where CEO's misjudge a situation or mood. It's evident they are getting their communications spectacularly wrong on a global level, as a matter of course. How?

Perhaps a lack of confidence in their own performance on a global stage. This I can understand and certainly forgive - the pressure of not slipping up, appearing to say the wrong thing or let your entire brand down is immense. But there is support, in the form of their comms departments, lawyers and external advisers like me. In United's case, there was initial confusion over who should say sorry, as the doctor had been removed by Chicago-based security officers, not United staff.

Regardless of this technicality, the flight was delayed by two hours, so United had a duty to apologise to customers for the inconvenience, at the very least, and the man removed was also a paying customer sitting in one of their aircraft! Arguing over who's at fault so early on was a poor hedging of bets.

This is an organisational risk issue in itself. How does a CEO go from PR Week's 'Communicator of the Year' to 'tone deaf'? That's less hard to answer. When a committee of conservative, defensive lawyers and PR advisers gather in a room, whether in conflict or agreement, you can imagine the slow juggernaut of emotionless deliberation, as the lawyers insist that saying sorry for anything, will open up the beleaguered firm to mass lawsuits. Case study after case study attests that, in the main, these lawyers are misguided and this is not the case. It is HOW you say sorry and how swiftly that matters and safeguards brand reputation, as NHS trusts have discovered. Research leading to changes in practice in America have prevented subsequent litigation.

And ultimately, this inertia leads to corporate firms taking an average of 21 hours to issue meaningful external communications to defend themselves - meanwhile the Twitter firestorm has gone global in under a minute.

Brands spend many millions on marketing and glossy ads, yet proportionately peanuts on executive crisis media coaching, to prevent them making monkeys of themselves. Good training will help them take the right advice and feel confident in making good public-facing decisions.

A notable recent exception to some of the poor performances we've seen, was the measured, professional apology responding to Ofcom's criticism and findings of BT Openreach. While it was more than likely a planned response, the group CEO Gavin Patterson, quickly fronted up for live radio and a round of TV interviews, taking responsibility and control of the situation, while apologising for falling below customers' expectations. That's the least we expected and Patterson delivered. The story ended there. More serious was the Alton Towers 'Smiler' disaster last year. So good was the response from Nick Varney, Merlin practically 'styled it out' throughout the whole crisis - in reality, they were people who faced up to their crisis, and cared deeply about their mistakes and the people affected.

So step forward Oscar Munoz. A CEO who's had to learn the hard way that not being seen, or not saying "sorry" early on, can lead to lasting damage and a story which runs for days, or longer. 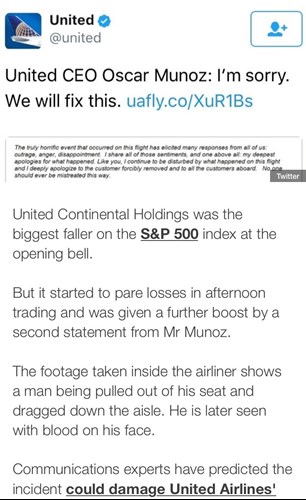 Those 'emotionless corporate entities' (to quote a phrase coined by Varney of Merlin), who hide behind faceless statements, are now chronically out of step with public perception. Yet they feel emboldened by the corporate 'yes' people around them - until that is, the share price plummets and they are forced to change tack. Of course the public aren't daft, and by day two, apologies are widely viewed as desperate, hollow and a cynical attempt to recover share value. Too little too late.

How your organisation handles a risk issue involving the public is business critical and may save or destroy it - we can't forget Tony, ('I want my life back') Hayward and BP's Gulf crisis - they're still recovering while he's long gone.

So, time for CEO's to go back to communications school?

Sadly, many have yet to really understand how corporate wildfires burn fast, furious and sweep the world if you don't respond correctly and quickly.

Part of this is their lack of understanding about the new media landscape. There are fewer mainstream journalists than ever, but five billion news gathering devices in the hands of a billion citizen journalists - as the boss of Uber discovered to his cost. Fearing what Piers Morgan might ask you is not nearly as important as fearing what 30 punters armed with smartphones on your aircraft film and report - that is 'eyewitness news'!

Wake up United, Uber, et al. There is a correct way to handle a corporate crisis and we coach firms in this, which is why you don't hear their 'traumas' played out in the media for days on end.

There's even a simple, handy formula that can save time, misery and ultimately shareholder value. United Airlines boss Munoz, says; "We will fix this." He'll need a new strategy, many months and deep pockets to gain any traction against the trust his firm has now lost.

Finally, you'd think lessons would be learned from that ultimate of CEOs - Donald J. Trump. The litany of almost daily gaffes from him and his senior White House team, leave much to be desired on media handling, diplomacy, appropriation of the facts and frankly, ignorance. Sean Spicer's latest Hitler remarks may not see him last the week.

We'll continue to watch with interest as another corporate disaster unfolds next week, for current form suggests at least one is inevitable. Ignoring media crisis response training is a game of Russian roulette.